POPULAR REGION! A property was booked in Cotswolds 14 minutes ago

Please note:
There is also a £3 Low Deposit administration charge to pay. Please refer to the Booking Conditions as amended by the {{filteredButtons[0].depositLink.web_title}} for further information.

Whitsun Cottage is a beautiful, double fronted Cotswold stone cottage, clad in Virginia creeper. The cottage is larger than many other properties of its age, with a separate living room, dining room and kitchen, two bathrooms, and higher ceilings than in many comparable properties. The cottage also benefits from an enclosed courtyard garden and its location in the heart of the picturesque market town of Stow-on-the-Wold, which has a wide range of bars, restaurants and cafes, as well as being ideally placed for exploring the wider Cotswold region. The cottage dates back to the 19th century and has been beautifully refurbished, whilst retaining numerous character features, including wooden floors and beams, two exposed stone fireplaces with wood burning stoves, ledge and brace doors, and a lovely oak stair-rail. Complementing this raft of character features, the cottage has modern facilities, including wireless internet access, Freesat TV and a well equipped kitchen. The cottage sleeps a maximum of 4+2 people (see bed configuration below), in two bedrooms and a large landing space, with two bathrooms. It is an ideal retreat for a family or a group of friends. Whitsun Cottage’s front door opens into the dining room. The ground floor rooms are: Living room: A stylish room, with wooden floors, an exposed stone fireplace with wood burning stove, leather sofa and armchairs. Including a comfy foot stool, the living room can seat six people. There is also a Freesat flat screen TV and DVD player. French doors lead out from the living room to the courtyard garden; Dining room: Contains an abundance of character features, including wooden floors and beams, an exposed stone fireplace with wood burning stove, window seat and wall alcoves. This beautiful room has a large oak dining table, with seating for six. There is also a digital radio, with iPod dock; Kitchen: A well equipped kitchen, containing a dishwasher, four ring electric hob, electric oven, microwave, kettle, toaster, fridge with freezer compartment, washing machine and tumble dryer. A stable door leads out from the kitchen into the courtyard garden. A staircase, with a beautiful oak stair-rail, leads up from the dining room to the first floor landing, off which are the following rooms: Bedroom 1: Contains a double bed and plentiful wardrobe space; Bedroom 2: Contains two 75cm wide single beds; Bathroom 1: Contains a bath with shower attachment, toilet and basin; Bathroom 2: Contains a shower, toilet and basin. The large landing space contains a day bed and a trundle bed, both of which can be set up, if required, to enable the cottage to sleep up to six guests. To the rear of the cottage is a small, fully enclosed courtyard garden, with an outdoor table and chairs, and a barbecue during the warmer months. Sheltered from the wind, this is a very pleasant space to sit outside and relax in. 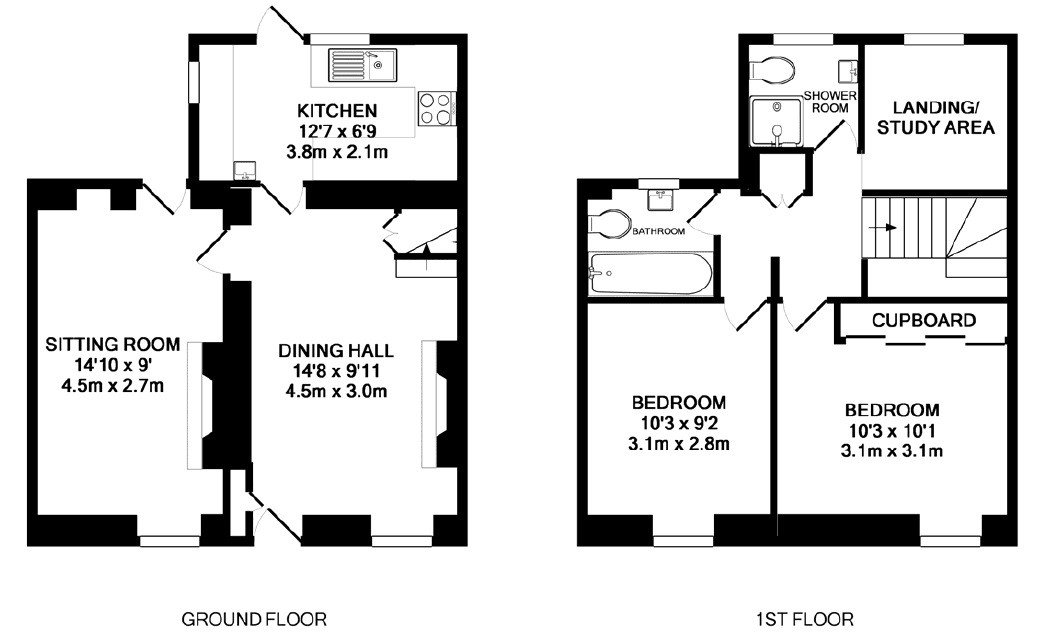 Note: The property is located on one of Stow's busier roads and some guests may be aware of traffic noise at night; the cottage is, however, relatively close to a junction, so traffic speed is limited past the house. Note: The Stow Horse Fair is held twice a year, on the Thursday closest to 12th May and the Thursday closest to 24th October, this is a traditional fair for people to meet up and trade which dates back to 1476 when its Charter was granted; Stow is very busy for a day or two before and after each fair, and a number of shops, pubs and restaurants are closed. Note: There is a single sofa bed and single truckle bed that can be made up on request.

Are you on the phone to our call centre? Your Customer ID is: 5nakc8kc