POPULAR REGION! A property was booked in Cotswolds 6 minutes ago

Heath Cottage is a beautiful, Grade II listed cottage, located close to the heart of the famous Cotswolds market town of Stow-on-the-Wold. Sitting on top of a hill, Stow is well known for its many antique shops, pubs and restaurants, as well as for the many lovely walks through the surrounding Cotswold countryside that are accessible directly from the town. The history of the town is beautifully preserved, including a medieval stone cross in the market square, the old town stocks and a number of alleyways for the passage of sheep being herded to market. Stow is also ideally positioned for exploring the wider region, including the many beautiful towns and villages of the Cotswolds, as well as further afield places, such as Stratford-upon-Avon, Oxford and Bath. Built in the early 19th century, in lovely honey coloured Cotswold stone, the cottage boasts an abundance of character features, including exposed stone work, oak beams and two impressive inglenook fireplaces, one of which contains a lovely wood burning stove. The cottage has been immaculately furnished in a warm, contemporary style, and the traditional character of the building has been complemented by modern facilities, including wireless internet access, a Smart TV and a well presented kitchen. Heath Cottage sleeps six people, in three bedrooms, with one bathroom. There is a pretty, enclosed courtyard garden at the rear of the property, and the cottage benefits from two allocated off street parking spaces. Heath Cottage is ideal for a family, or a group of friends, seeking a stunning, character filled cottage, which is perfectly located for exploring the beautiful Cotswolds region. Heath Cottage is located at the end of a short row of Cotswold stone cottages. The front door opens directly from the street into the dining room, and the following rooms are on the well laid out ground floor area: Living room: A spacious, dual aspect room, with a wealth of character features, including a flagstone floor, oak beams, exposed Cotswold stone, and a large inglenook fireplace with a cosy wood burning stove. The room is furnished with a large corner sofa, which comfortably seats four, a large footstool, comfortable window seat, and a Smart TV; Dining room: Another lovely, character filled room, with a large, ornamental inglenook fireplace and original exposed oak beams, which contains a large dining table with seating for six. A fridge freezer is also located in this room; Kitchen: Accessed from the dining room, the kitchen contains an electric oven, four-ring electric hob, dishwasher, washing machine, microwave, kettle and toaster. A door from the kitchen leads out to the courtyard garden. A steep, winding staircase leads up from the dining room to the first floor landing, off which are the following rooms: Master bedroom: A beautiful room, which contains a king size sleigh bed, fitted wardrobe, and a dressing table with a mirror; Family bathroom: Contains a bath with handheld shower attachment, walk-in shower, toilet and wash basin; The second floor bedrooms are in the beautiful eaves of the cottage, and are accessed from the first floor landing by separate steep staircases, with low beams, which open directly into each bedroom: Bedroom two: Contains a king size bed and a fitted wardrobe; Bedroom three: Contains a fitted double bed, fitted wardrobe, and a chest of drawers with a mirror. A door from the kitchen leads out to an enclosed courtyard garden, which catches the late afternoon sun. There is a table with seating for six, a charcoal barbecue, and a shed that can be used to store bikes. At the end of the garden there are two allocated off street parking spaces. 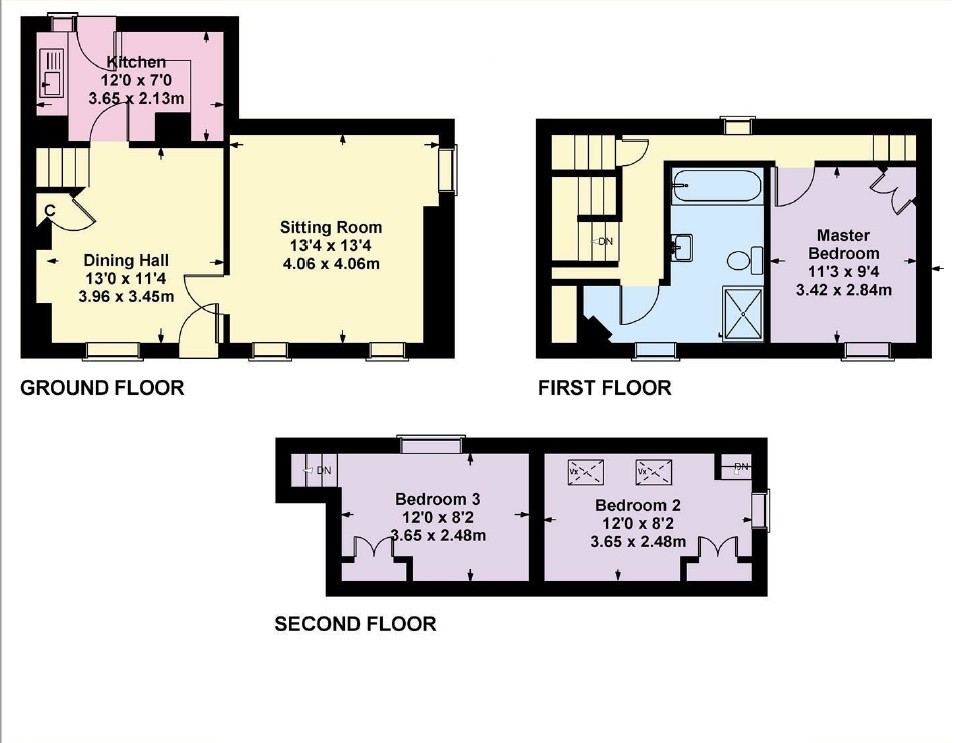 Note: This is an old property with character features, including steep stairs and low beams, which is laid out over three floors (with the steepest stairs and lowest beams on the way up to the second-floor bedrooms), and could therefore pose difficulty to guests with limited mobility. Note: The front door of the property opens onto the street, and guests with young children should take particular care to ensure that they are supervised when the door is opened.

Are you on the phone to our call centre? Your Customer ID is: 5mr8bdkr