Middle Gable The Old Hall is a beautiful Grade II* listed property that sleeps up to five guests, in two bedrooms, with a family bathroom and a further shower room, as well as a large living room. The property has a traditional feel and retains a wealth of character features including dovecotes (square holes on the outside wall, originally intended to house doves or pigeons), stone mullion windows, wooden beams, a magnificent fireplace and original wooden flooring. Complementing these period features, Middle Gable The Old Hall has modern facilities, including wireless internet access, two Freesat TVs, a Blu-ray home theatre system and a well-equipped kitchen. The property sits in peaceful gardens, which have a seating area for guests, and quiet, off-street parking is available for up to three cars. Bourton-on-the-Water, often voted as one of the prettiest villages in England, has a unique appeal to visitors and residents alike. Middle Gable The Old Hall is situated in the heart of Bourton, and is in walking distance of the many attractions, shops, restaurants and tea rooms that the village has to offer. Bourton is also perfectly located for exploring the many other lovely towns and villages of the Cotswolds region, including the highest of the Cotswold towns, Stow-on-the-Wold. A popular place of interest in Stow that really shouldn’t be missed is England’s oldest inn, The Old Stocks. From Bourton-on-the-Water, further afield places such as the historic Stratford-upon-Avon, Oxford and Bath are easily accessible for day trips. Middle Gable The Old Hall is accessed via its garden, which leads to the beautiful wooden front door. Inside the house, a small entrance hall leads into: Living room: A grand room, which has been newly refurbished in a traditional style, enhancing the abundance of period features, including stone mullion windows, a large fireplace with wood-burning stove, wooden beams and a centuries old alcove. The refurbishment includes a limestone flagged floor, with underfloor heating, and the provision of a flat screen satellite TV and Blu-ray home theatre system with an iPod docking station. The living room then leads into the Inner Hall, which in turn leads to: Shower room: Contains a shower, basin and toilet; Kitchen/dining room: The kitchen is well equipped, including a cooker with hob, microwave, dishwasher, fridge, freezer and washer dryer. There is a good sized dining table, with five chairs, and the layout of the room ensures that all guests can socialise whilst cooking is in progress. Returning to the Inner Hall, a grand wooden staircase leads up to the first floor hallway, off which are: Bedroom 1: The initial highlight of the room is the spectacular super-king size four poster bed and this impressive room also has what is believed to be the original wooden flooring, stone mullion windows and the original “wig and gown” cupboard. There is a flat panel satellite TV in the room; Bathroom: Contains a bath with shower attachment, basin and toilet. The staircase then continues up into the gable of the house, giving access to: Bedroom 2: A very spacious, dual aspect eaves bedroom, with beautiful original wooden beams. The room contains three single beds, one of which doubles up as a sofa (it is a full size adult bed, however). Heading back downstairs and out of the front door, the lovingly cared for open plan gardens spread out in front of you. In Middle Gable The Old Hall’s garden, extending from the front of the house, there is a bench, for relaxing and looking out over all the gardens, as well as a paved seating area, which contains an outdoor table and chairs. At the end of the garden is a double garage for guest use. 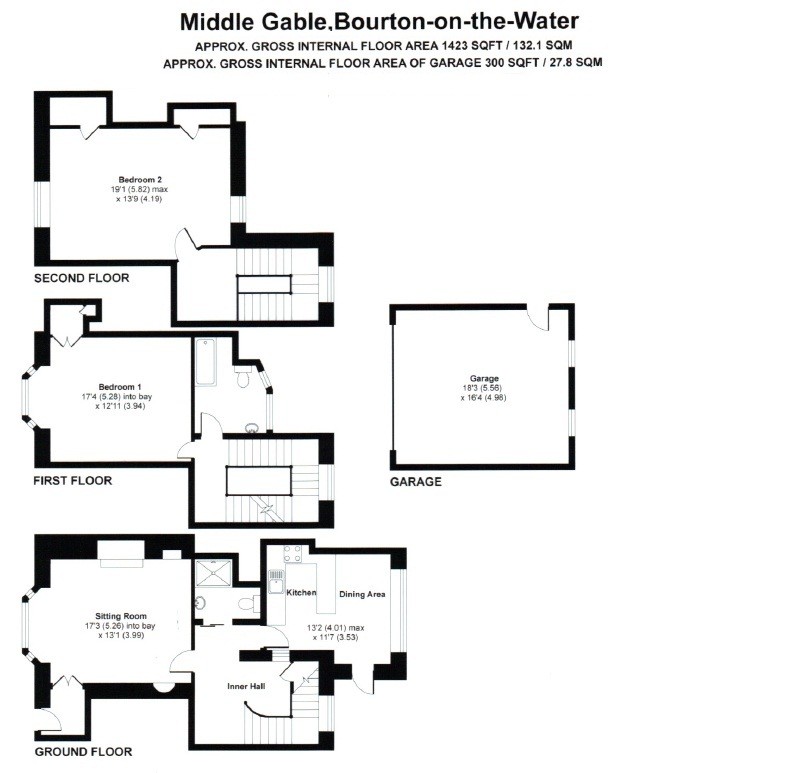 Located in the Cotswold Area of Outstanding Natural Beauty, the historic village of Bourton-on-the-Water dates back to Neolithic times with over 100 buildings being Grade II listed or higher. The picturesque high street nestles alongside the River Windrush over which several low stone bridges span, which is why Bourton-on-the-Water is known as the Venice in the Cotswolds. Tradition states that an annual football match is played in the summer, in the River Windrush with the banks lined with spectators, with the aim to score as many goals as possible and get as wet as possible! The village has an eclectic range of visitor attractions, including The Model Village, Cotswold Motor Museum, Birdland Park and Gardens as well as a Dragonfly Maze, monthly farmers’ market as well as many tea rooms, an artisan bakery, antiques and craft markets, traditional sweet shop, cycle hire and its very own perfumery. Nearby, Stow-on-the-Wold, originally an Iron Age Fort, epitomises traditional England. This ancient market town has played host to many fairs since the 12th century and today holds a biannual Gypsy Horse Fair, craft fairs and monthly farmers' market. The vast market square boasts an ancient cross at one end and the village stocks at the other, surrounded by an elegant array of Cotswold stone townhouses, antiques shops, tea rooms, traditional pubs, award-winning restaurants and its very own cricket museum. Also take a visit to the medieval town of Burford for a great day out where you can enjoy a trip to the Cotswold Wildlife Park and Gardens. The Saxon market town of Moreton-in-Marsh and the quintessential English village of Broadway are both within easy reach and make a great day out. The spa town of Cheltenham is, architecturally, the most complete Regency town in England with an incredible range of shops, cinemas, theatres, restaurants and pubs, it is famous for its horse racing festival in March, culminating in the Gold Cup steeplechase. Oxford, the oldest university city in England and sometimes called The City of Dreaming Spires has an abundance of prestigious attractions, including the 38 colleges of the university (half of which date back before 1600), the oldest university teaching room, the Bodleian Library, Ashmolean and Pitt Rivers Museums, and Botanic Gardens. Stratford-upon-Avon, Bath, Worcester and the waterfront city of Gloucester are also all within easy reach.

Note: No candles or similar products. Note: No stag/hen or similar parties. Note: No corporate or commercial bookings. Note: Logs for the woodburning stove can be purchased locally. Note: The owners of Middle Gable The Old Hall are proud supporters of www.giveustime.org.uk, which provides holidays to servicemen and their families, to help them adjust to life after combat.

Are you on the phone to our call centre? Your Customer ID is: it5rgv87