Steps Cottage is a beautiful, end of terrace cottage and Cotswold stone annexe, dating back to the 18th century and located in the heart of the picturesque Cotswold market town of Stow-on-the-Wold. As well as having instant access to all Stow's pubs, restaurants and shops, Steps Cottage also has the rare benefit in Stow of a large, enclosed garden, which gets the sun all day, and garage parking for two cars, plus bikes. Stow itself is perfectly located for exploring the stunning Cotswold countryside and numerous local attractions. The cottage is built from traditional Cotswold stone and has been lovingly decorated and furnished, with many character features, including wooden beams, exposed stone walls and a Jotul wood burning stove in the living room. Complementing these character features, the cottage has modern facilities, including wireless internet access and BT Vision TV. The accommodation at Steps Cottage is split between the main house and an annexe at the end of the garden, known as "The Bolt Hole". The Bolt Hole contains a bedroom, with en-suite bathroom, a living room/2nd bedroom and a tea point. Steps Cottage sleeps a maximum of ten people, in three bedrooms (one of which is in the Bolt Hole) and two additional sleeping spaces (see Key Features). There is a family bathroom in the main house and en-suite bathroom in the Bolt Hole. Garage parking is available for two cars, plus bikes, with further free parking available locally. The cottage is perfect for a large family holiday or for groups of friends seeking a character property in the heart of a beautiful market town. Steps Cottage's front door opens onto the High Street, which is just a few yards from Stow's market square. Entering through the front door, there is a small hallway, which leads into the living room. The main ground floor rooms are: Living/dining room: This large, dual aspect room is the heart of the house, with exposed stone walls, solid beech flooring and a large fireplace, containing a Jotul wood burning stove. Complementing the character features, there is a TV with BT Vision and Freeview, a DVD player and an iPod/iPad/iPhone dock. There is comfortable lounge seating for six (extra seats can be moved in from the kitchen or conservatory) and a large dining table that can seat up to 10 guests; Kitchen: A long, galley style kitchen, containing a cooker with four ring gas hob, a fridge freezer and a microwave; Utility room: Accessed via the kitchen and with a door leading out to the garden, the utility room contains a dishwasher, washing machine and tumble dryer. A quirky Victorian lavatory is also accessed from the utility room; Conservatory: French doors from the living room lead into the simple wooden conservatory, which has double doors leading out into the garden. Wooden stairs lead up from the hallway to the first floor landing, off which is a bedroom and the family bathroom: Bedroom 1: A dual aspect room, with an exposed stone wall and beech floor. Contains two single beds, which can be made up as a super king size bed; Family bathroom: Contains a bath with overhead shower, basin and toilet. The stairs then continue up to the second floor and a further bedroom and sleeping space in the eaves of the house: Sleeping space: Immediately at the top of the stairs, a large landing space contains two single mattresses (each 180cm x 75cm), running lengthways on a raised platform. One or both mattresses could be moved off the raised platform, if this was preferable to the room's occupants. Please note that there is no doorway onto the landing from the stairs, however, there is a fixed stair gate, to safely enclose the room (please see Key Features section for a detailed understanding of the potential bed configurations); Bedroom 3: Accessed via the landing space, this lovely eaves room, with wooden beams and flooring, contains a king size bed. Heading back downstairs and outside, through either the utility room or the conservatory, the large, multi-level garden, which gets the sun all day, is to the rear of the house and contains a mixture of gravelled seating areas, mature plants and bushes, all enclosed by Cotswold stone walls, forming a beautiful sun trap. Despite being in the centre of Stow, the garden is very quiet and tranquil, perfect for both adults and children to relax securely in. There is an outdoor table and chairs for six people (with further seating available in the conservatory). At the end of the garden, above the garage, is the Bolt Hole, built of traditional Cotswold stone, with a modern interior. The Bolt Hole contains: Living room/bedroom/tea point: Contains two sofa beds, a flatscreen Freeview TV and a tea point, with a fridge, microwave, kettle, plus a table, with seating for four; Bedroom 3: Contains two single beds, which can be made up as a super king size bed. There is an en-suite bathroom, with a bath and overhead shower, a basin and a toilet. Below the Bolt Hole is the large double garage, with off street parking for two cars, and plenty of secure storage space for bicycles. Floorplan 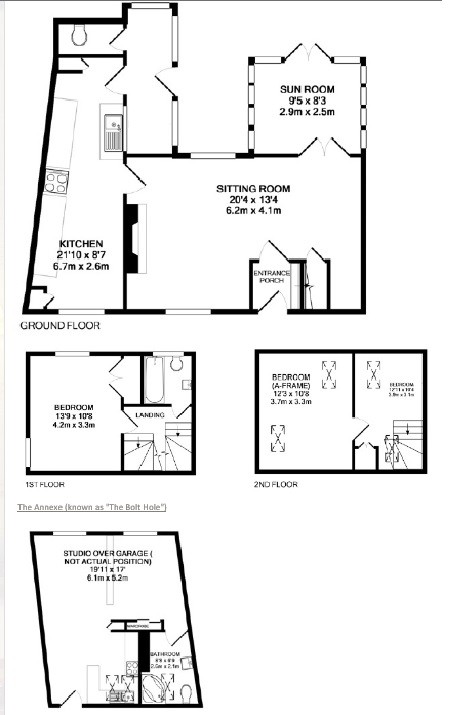 Note: Steps Cottage is an old property and has character features including relatively narrow and steep stairs, some low beams, and multiple floors and garden levels, which could pose difficulty to guests with limited mobility. Note: Logs for the woodburning stove are provided under a fair usage policy and there is an honesty box provided for the logs used. Note: Infants who sleep in a cot do not count towards the occupancy figure, however, due to space restrictions, the occupancy figure may only be exceeded by up to two additional infants. Note: There is a telephone, for UK calls only, with an honesty box for the cost of calls made. Note: Access to the Bolt Hole is via external wooden steps which could be slippery when wet. Note: The Stow Horse Fair is held twice a year, on the Thursday closest to 12th May and the Thursday closest to 24th October, this is a traditional fair for people to meet up and trade which dates back to 1476 when its Charter was granted; Stow is very busy for a day or two before and after each fair, and a number of shops, pubs and restaurants are closed. Note: The super-king-size bed in the annexe is zip/link and can be changed to twin on request.

Are you on the phone to our call centre? Your Customer ID is: d03v5696